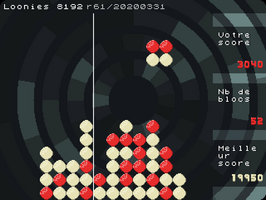 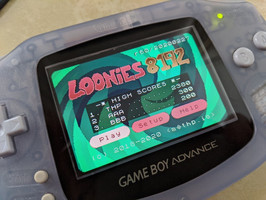 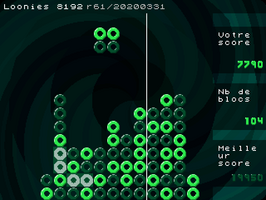 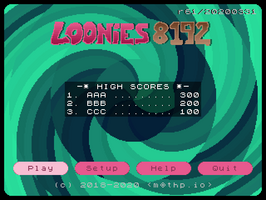 It's finally here: The GBA port of Loonies 8192. In addition to the fresh port, the existing DOS, 3DS and PSP builds were also updated with the new visuals, optimised rendering, more audio playback options as well as support for global leaderboards via QR codes.

The background effects have been re-done (it's still all palette color rotation, but instead of generating it at every startup, I've written background effects in Python 3 and  those render out suitable data to be loaded at runtime, which made authoring the backgrounds so much easier), the PSP and 3DS versions ship with all backgrounds enabled, whereas the DOS and GBA ports have a reduced selection of backgrounds due to memory constraints.

Rendering and performance have also been improved: The DOS version now renders semi-transparent blocks (instead of the black background from previous versions), and a weird interlacing method has been added to transition backgrounds so that the game doesn't lock up whenever the background changes on lower-performing machines.

Instead of showing just the highest score in-game, the main menu has been re-done and the top 3 local high scores are now shown -- a name input (arcade-style 3-letter names) has been added, and when a high score is achieved, that name + score (+ platform) can be submitted online via a QR code shown on-screen (so you don't need to be online with your DOS machine or GBA, you can still submit scores ;).

Give it a spin, and submit your high scores :)