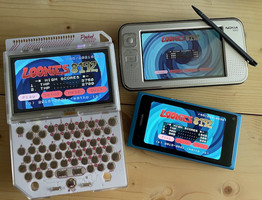 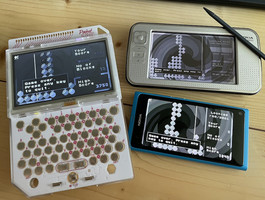 With the previous release adding official Android support, and with that adding touchscreen support for the game, there was no reason why the game can't be ported to other touchscreen devices. In fact, I do happen to have some old gadgets (which these days can definitely be considered "retro") sitting around in a drawer, and all those have a few things in common:

Since I already have a SDL 2.0 "port" for local development, changing that to work for SDL 1.2 wasn't that big of a deal. Of course, every device is slightly different, so there was some work involved to get it working nicely. The N800 supports SDL 1.2 and pixel doubling in the "omapfb" display driver and via libXsp, so that was enabled for better performance. The N9 supports SDL 1.2 with OpenGL ES, so ES 1.1 is used for scaling/blitting the backbuffer to the screen (and because it supports GL_OES_compressed_paletted_texture, the 8-bit paletted image can be pushed to the GPU directly). The PocketCHIP supports SDL 2.0, so that is used there (it would support OpenGL ES, but since the screen has a really low resolution, we can just scale and render in software). The N800 and PocketCHIP do have physical buttons, and those are properly mapped. All 3 devices support touchscreen input.

Apart from that, the current ports have also been updated, and some fixes have been incorporated.